A sick leave and an investigation

There are a couple of connections of the Parker expedition to India.

In 1906 Montagu Parker was serving with the Grenadier Guards but all was not well. He was suffering because of his service in the Boer War. In 1906 he took sick leave from the army. He was diagnosed as suffering from neurasthenia due to ‘exposure and the hardships of active service during the South African campaign’.84 His symptoms included insomnia, fevers and digestive problems. Neurasthenia was a recognised condition in the British armed forces from the late 19th century until the end of the First World War. During this period, the British army also used the term shell shock to describe the same symptoms. However, shell shock was diagnosed in other ranks, and neurasthenia was generally diagnosed only for officers. Today we would say that Parker had post-traumatic stress disorder. The remedy which the doctors agreed on was that he should take an extended leave from England and spend this ‘in the East or on a long sea voyage.’ Parker did this and circumnavigated the world, spending a good amount of time in India.  He spent time in Simla. 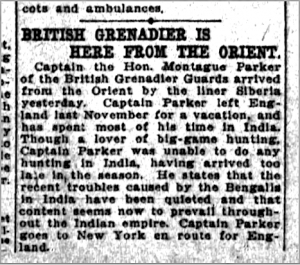 Following the Haram al-Sharif incident in 1911 there was a great deal of anger against the expedition.  On the 26th August 1911, Sir Gerard Lowther (the British Ambassador to the Ottoman Empire) wrote to the Foreign Secretary in London about the trials in Beirut resulting from the Haram incident. He also reported that the consul in Beirut had received a visit from the Secretary of the influential All-India Sufi Conference. The conference had delegated the Secretary to travel from India to Jerusalem to investigate the alleged theft of ‘ancient moslem relics’.