In the 19th century Ireland was not separated politically. It was a single country ruled from London. The major Irish connection is with a part of Ireland which is still part of the United Kingdom. So the map does not reflect this and refers to the Republic of Ireland.

An Irish emigrant and an aide to the viceroy

Samuel Wilson, was born in County Antrim in Ireland. He was the sixth son of a farmer. In 1838, when criminals were still being transported, two of Samuel’s elder brothers emigrated to Australia. The brothers had read about the healthy climate and opportunities in the new colony for settlers with capital. Despite stiff opposition from their parents, the brothers sailed to Australia. A third brother joined them a few years later and together they bought a farm north of Melbourne. Their decision to leave Ireland was probably a good one. In the 1840s, Ireland suffered its worst-ever natural disaster, the Great Famine. Around one million people died of starvation and associated diseases during this period and another one million emigrated from Ireland.

Samuel Wilson was still a child at this point but when he was 22 he sailed to Australia at the height of the Australian gold rush. He made a fortune in Australia through sheep farming. In 1874 his annual income was estimated as almost £100,000 and came back to the northern hemisphere a very wealthy man. In 1881 he contested the Londonderry county as a Conservative candidate. He was unsuccessful but was later elected an M.P. for Portsmouth. 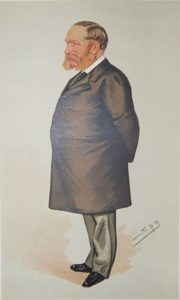 Cyril was born in 1876, the fifth son of the 1st Earl of Dudley. His elder brother became the 2nd Earl of Dudley on his father’s death. He became a Conservative politician and served as Lord Lieutenant of Ireland from 1902. He makes a small appearance in James Joyce’s Ulysses. 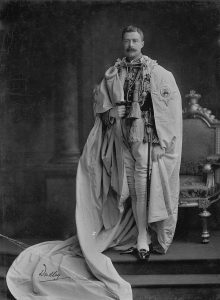 Cyril Ward served as an aide to his brother during his time in Ireland.