In March 2022 there is a war raging in Europe, though Vladimir Putin denies that Russian forces have invaded Ukraine and are instead engaged in a ‘special military operation’. He also justifies his peacekeeping mission by saying that Ukraine is not a real country but a historical part of Russia. Russian spokesmen have also threatened Finland and Sweden with ‘military and political consequences’ if they were to join NATO. As anyone with the briefest knowledge of history knows that borders have shifted as Empires wax and wane. The Ottoman Empire used to rule parts of Ukraine but no one seems to be suggesting that Turkey should still control these. These border shifts apply equally to countries such as Sweden and Finland. Indeed the relationship between Russia Sweden and Finland is an interesting one and curiously impacted on members of the Parker expedition.

Finland was once ruled by Sweden and this status only changed during the Napoleonic Wars. Russia initially joined the alliance of European monarchs opposed to Napoleon. However, after a series of disastrous military defeats by the French celebrated in streets names and stations across France Tsar Alexander I made peace with Napoleon at Tilsit and switched sides

Tsar Alexander used the peace with France to try and make gains for Russia. He pressured Sweden to switch sides and join the alliance against Britain but when they refused Russia attacked Sweden and the two countries fought a war between 1808 and 1809. The end result of the war was the loss of Finland for Sweden and the creation of the Grand Duchy of Finland as an autonomous part of the Russian Empire. It stayed that way for a century.

The events which changed it were the seminal early events of the 20th century, namely the First World War and the Russian Bolshevik Revolution. So when the Parker Expedition took place the Finns on it came from within the Russian Empire. They were Valter Juvelius and Pertti Uotila. 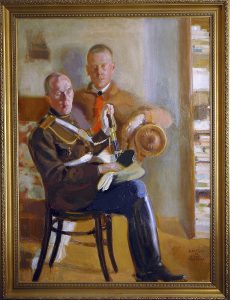 He went to St Petersburg and trained at the famous Nikolai Cavalry College. On graduation he became an officer in the Pihkova/Pskov Dragoons in the Russian Imperial Cavalry and fought in the disastrous Russian campaigns against Germany. The losses the Russians suffered were significant contributory factors to the two revolutions in 1917, which saw first the Tsar overthrown and then the Bolsheviks seize power. Finland took advantage of the instability and declared independence from Russia. This led to a bloody civil war in Finland, with Red versus White. As with most civil wars, it was brutal, with atrocities committed by both sides. The war also drew in the Bolsheviks, the Germans and the Allies. Despite his youthful socialism, Uotila fought for the right-wing Whites, who eventually proved victorious. 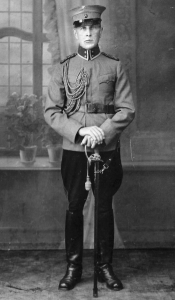 After the Finnish Civil War, Uotila fought against Bolshevik Russia for several more years in the Heimosodatot or Tribal Wars. The British opposed the Bolshevik Revolution and supported those fighting against it. They landed a force in Murmansk in Northern Russia to help in the fight. Winston Churchill said the policy was ‘to strangle at birth the Bolshevik State’. Many groups including the Germans were fighting here and their identity was not always clear.

Uotila’s friendship with the Old Etonians, made in the heat of Jerusalem, now proved crucial in the cold of the Artic Circle. The British did not want any weapons they provided to local forces to reach either Bolsheviks or the Germans, so they were initially suspicious of a group of Finns fighting in German-supplied uniforms. Out of these strange-looking soldiers stepped Uotila to help sort matters out. He negotiated with the Royal Navy officers and convinced them that they should supply his Finnish forces with arms and munitions. His connections to the British establishment were vital in persuading the Royal Navy officers they could trust him. One of the foremost proponents of Britain’s policy in Russia was Winston Churchill, former First Lord of the Admiralty. In 1918 he was minister of munitions. Pertti had spent time in Jerusalem with Gordon Wilson, who was married to Winston Churchill’s aunt.

These battles were not Uotila’s last fight with the Russians. After the Soviet Union signed the Molotov–Ribbentrop Pact with Nazi Germany in 1939 Hitler invaded Poland. Two weeks later, the Soviets marched into Eastern Poland, as agreed with Germany. They also invaded Finland, and the two unequally matched nations fought the three-month Winter War. Uotila, now almost sixty, rejoined the Finnish Army. Despite the mismatch in sizes, the Finns were largely successful in defending their country against its much larger neighbour.