Winston Churchill had close connections to several members of the Parker expedition both by marriage and friendship. 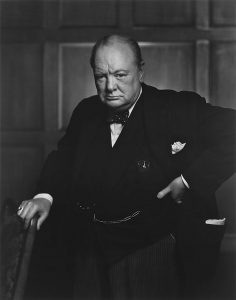 The closest link was to Gordon Wilson who was part of the expedition between 1910 and 1911. Gordon married Lady Sarah Spencer-Churchill in 1891.  She was the youngest daughter of the 7th Duke of Marlborough. One of her brothers was Lord Randolph Churchill, the father of Winston Churchill. So she was Winston Churchill’s aunt.

At the time of the marriage, Winston was still at school and wrote to his mother asking for permission to attend the wedding. He had fun at the wedding and afterwards wrote to ‘Mamma’ saying that he regretted having to leave the wedding early as he was “making an impression on the pretty Miss Weaslet”.

Although she was his aunt, there was only a nine years age difference between the two of them and they knew each other well.  Winston met the couple regularly and became friends with Gordon and other members of the Wilson family. Gordon had already become famous when he was at Eton. He helped thwart an assassination attempt on Queen Victoria. Gordon was born in 1865 in Wimmera in Victoria in Australia. He was the eldest son of Sir Samuel Wilson, who had made one of the greatest fortunes ever in Australia. In 1881 Sir Samuel brought his family back to the United Kingdom and sent Gordon to Eton. In 1882 Queen Victoria was travelling between Windsor railway station and Windsor Castle when a lunatic named Roderick Maclean aimed a pistol at the Queen. There were many Eton College boys in the crowd and Gordon Wilson happened to be standing near the attacker. He heard Maclean fire a shot and looked round to see Maclean with his right arm raised to fire again. Gordon and another schoolboy called Leslie Murray Robertson tackled him. Gordon grabbed Maclean by the arm and hit him over the head with his umbrella. Murray Robertson grabbed Maclean as did Police Superintendent Hayes. Wilson and Murray Robertson helped to overpower Maclean and were later presented to a grateful Queen at Windsor Castle. 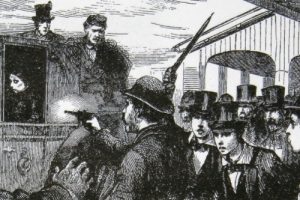 Newspaper image of the assassination attempt

Perhaps helped by his fame in saving Queen Victoria and certainly helped by his father’s fortune Gordon married Lady Sarah Spencer-Churchill in 1891. The wedding was conducted by the Archbishop of Canterbury and attended by the Prince of Wales and a host of English aristocracy. It was a match that suited both families. Lady Sarah was an acerbic and challenging character. The Churchill family worried about her marriage prospects and the difficulty of ‘finding any sort of husband’ for her. They were much relieved when Sarah became engaged to Gordon Wilson and the prospect of her being ‘settled down and well off’. For the Wilsons the match continued their progress up the social ladder. It connected them with one of the most famous aristocratic families in the country.

Winston Churchill helped make his name in South Africa during the Second Boer War. He was in South Africa writing for the Morning Post newspaper and was captured by and escaped from the Boers. Lady Sarah and Gordon were both in South Africa during the war. Gordon Wilson was appointed as aide-de-camp to Colonel Baden-Powell. Baden-Powell was in Mafeking. Lady Sarah remained in the town with her husband. In the early days of the war the Boers pushed back the British. They besieged British forces in Ladysmith, Kimberley and Mafeking. Gordon pressed his wife to leave and head to safety away from the fighting. She did eventually leave the town. However, Sarah did not go far and, together with her maid, stayed in a Boer-dominated area close to Mafeking on the edge of the Kalahari Desert. When food ran low, Sarah moved. She did not hide from the Boers and travelled to see the wreck of an armoured train the Boers had attacked.

While she was staying close to Mafeking Lady Sarah would see members of the press passing who were bringing information to and from the besieged town. One of these was a Reuters correspondent who used carrier pigeons. One of these pigeons carried a message mentioning Lady Sarah which the Boers shot. They read the message and they captured Lady Sarah. After negotiation she headed back to join her husband in the besieged town. Back in Mafeking, she found out that the Boers had captured the Daily Mail correspondent. Alfred Harmsworth, the newspaper’s owner, asked Lady Sarah to replace him and she agreed to send the newspaper reports of the siege. Together with Baden-Powell’s inventive and successful defence of the town her reporting made headlines across the Empire.

After the end of the siege Lady Sarah travelled with another officer’s wife to Pretoria where they found the city full. She tried the Grand Hotel and was initially told that the hotel was full but then was told that there was an officer leaving shortly. Lady Sarah was told

‘the gentleman occupying it was packing up his belongings preparatory to his departure. Great was my surprise at discovering in the khaki-clad figure, thus unceremoniously disturbed in the occupation of stowing away papers, clothes, and campaigning kit generally, no less a personage than my nephew, Winston Churchill, who had experienced such thrilling adventures during the war, the accounts of which had reached us even in far-away Mafeking.’

In the years before the Parker expedition, Winston socialised with the Wilsons. In October 1904 he wrote to a close friend.

‘I dined last night with Gordon and Sarah and we had a good old yap. Sarah’s tongue is becoming even more vicious than it used to be but I was amused.’

The friendship was so close that when Winston that in 1907 when Winston was Under-Secretary of State in the Colonial Office, he undertook a five-month trip to Africa accompanied by Gordon Wilson. They travelled thousands of miles following the Nile’s course through lands that were then coloured pink on maps but are now Egypt, Sudan, Uganda and Kenya. They then returned by steamer from Mombasa. While he was in Africa, Winston wrote to King Edward VII. He said how pleasant it was to have Wilson with him ‘for he is an excellent traveller never not of spirits or tired or bored or vexed whatever may hap(pen).” 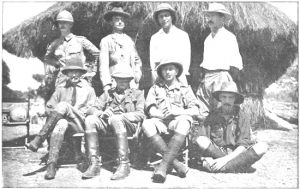 The friendship extended to other members of the Wilson family. Winston Churchill lived at a flat in 105 Mount Street in Mayfair in London between 1900 and 1905. This is the same address recorded as Clarence Wilson’s residence on the shareholder documents for J.M.P.F.W.Ltd. I do not know when Clarence Wilson moved into 105 Mount Street but it is possible that he and Winston Churchill were neighbours. Clarence certainly knew Winston well enough to sent a wedding gift to him and Clementine on their marriage in 1908.

There is nothing in the archives that I have found which proves Winston Churchill talked to Gordon or Clarence about the expedition but given their closeness it is hard to imagine that they did not. Jerusalem, Palestine and a possible Jewish state was a topic that interested Churchill. In 1904 he had opposed the Conservative Aliens Bill which sought to limit Jewish immigration into the United Kingdom following the pogroms in Russia and Poland. He said the Bill which the Conservative government had introduced was

He also wrote private letters in 1906 and 1908 expressing sympathy for the ‘a safe and settled home under the flag of tolerance and freedom’ and ‘that Jerusalem must be the ultimate goal’.

The expedition was extremely successful in gaining agreement from the Ottoman Imperial government to undertake the expedition and dig close in Jerusalem. There have been many explanations given for this. One is simple bribery. It is almost certain that they bribed Ottoman ministers. The accounts of the expedition show a disproportionate cost to secure the concession. Another explanation which is very plausible is that the Ottoman authorities believed that the gains of the expedition would help pay off a great deal of their debt. The Ottoman government had significant financial problems and a 50% share of the proceeds of the expedition would go a long way to do this. Members of the expedition valued the Ark and the other Temple treasures at £40 million which is the equivalent of £4.5 billion in 2021. This would have been very welcome to the Ottoman government. Another way that Montagu Parker gained the agreement of the Ottoman government was to emphasise and perhaps even exaggerate his establishment connections. Parker’s father had been a government minister and his brother sat in the House of Lords. However, many newspapers said that he was related to Lord Morley a government minister, which is not true. At the time that Parker was negotiating with the Ottoman government Winston Churchill was a member of the British cabinet. He was appointed as President of the Board of Trade in 1908. In 1910 he was appointed to one of the great offices of state Home Secretary. He held these posts when Gordon and Clarence Wilson were digging in the Dome of the Rock. There is no proof that the expedition used this connection, but on the other hand, it is hard to imagine that they would not have used them.

A few months after Gordon returned from Jerusalem he was promoted to command of the Royal Horse Guards. When Gordon died in action in November 1914 Winston attended the Memorial Service in Mayfair and also wrote to Lady Sarah. He wrote that Gordon’s death is ‘the end of the world’. He wrote

‘It is much better for a soldier to die this way than any other – in this greatest of all wars – in command of the Royal Horse Guards on a glorious field. I am so deeply grieved – and for your sorrow I cannot find words.’

In her reply, Lady Sarah wrote to Winston how ‘that trip in E(ast) Africa you took together was always one of his (Gordon’s) happiest recollections.

One final connection of Winston Churchill to the expedition was a visit to Saltram, the Parker family seat in 1950. Montagu Parker became the 5th Earl of Morley a year later. In 1950 Churchill was the leader of the Opposition and held an election rally called ‘The Plymouth Fair’ He spoke at the rally and it is safe to say that it was not one of Churchill’s greatest speeches though he did talk about the dangerous situation around the Korean War. The rally, though well-attended, was a bit of a damp squib. As the video shows it was a very rainy July day in South West England.