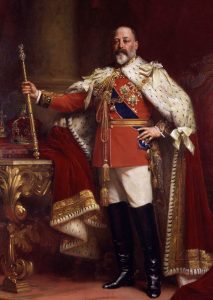 King Edward VII was neither a participant nor investor in the Parker expedition but he did know most of the British members of the expedition very well. Many of the British members of the expedition were married but three were married. These were Gordon Wilson, Robin Duff and Cyril Ward. Edward attended two of the three weddings and might well have attended the third if it had not been scaled down to a small family affair due to bereavements in the family.

The first wedding he attended was Gordon Wilson’s marriage to Lady Sarah Spencer-Churchill in November 1891. The wedding was performed by the Archbishop of Canterbury and the Prince of Wales, as he then was, was foremost amongst the guests. He was not the only royal in attendance; the Duke of Cambridge, a cousin of Queen Victoria and at that time Commander-in-Chief of the Army attended as did his wife the Duchess of Teck and their daughter Princess Victoria of Teck who later married the future King George V.

As ever the Prince of Wales complicated love life intersected with the family. He had a brief affair with Jennie Jerome the future wife of Lord Randolph Churchill, Lady Sarah’s brother.

In June 1903 Robin Duff married Lady Juliet Lowther. Her stepfather was Lord de Grey, who was the Treasurer of the household of Queen Alexandra, Edward VII’s consort. Lady Juliet was a favourite of the royal family. King Edward VII, Queen Alexandra and Princess Victoria all attended the wedding at St. Peter’s, Eaton Square, London. The Press Association reported that 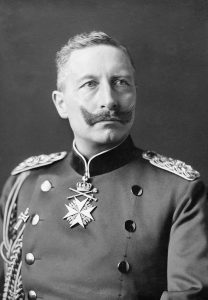 Robin Duff was an officer in the Life Guards of the Household Cavalry and was at one point was Silver Stick in Waiting to Edward VII. In 1902 before his marriage to Lady Juliet he was involved in an episode of bullying of a fellow officer. He and several other junior officers stripped 2nd Lieutenant, Charles Dalton Gregson and auctioned off his clothes. They emptied horse manure over him, rolled him in mud, ducked him in a water trough then threw his furniture out of his room. Finally, they made him run around the green outside the mess dressed only in his boots and underwear. They were punished by having their leave cancelled for six months. King Edward VII thought even these sanctions were too harsh. The victim arguably suffered a worse punishment; Gregson was transferred out of one of the most prestigious regiments in the British army and posted to the Indian army.

The third married member of the expedition was Cyril Augustus Ward. He was the fifth son of the Earl of Dudley and in April 1904 when he married Baroness Irene de Brienen, the daughter of a wealthy Dutch aristocrat. The families of both the bride and groom were in mourning so the wedding at St. Peter’s, Eaton Square was a small family one with few guests. However, King Edward VII would likely have attended the marriage in different circumstances as he attended weddings of several of Cyril’s brothers and had invested Cyril with the Royal Victorian Order.

Once again the Prince of Wales love life played a role in the close connections. He also had a very close personal relationship with Cyril’s aunt Lady Harriet Mordaunt. She had been one of Edward VII’s many mistresses and also one of the most notorious. Her husband divorced her for adultery, a highly unusual move in Victorian England. He did this after Lady Mordaunt told her husband she was pregnant and the baby was not his. The Prince of Wales paid regular visits to Lady Mordaunt at her home. In court, Sir Charles Mordaunt as good as accused the heir to the throne of adultery with his wife. The Prince of Wales felt obliged to give evidence. It is hard to overemphasise how scandalous it was for the heir to appear in court to deny he had committed adultery with a married woman. At the end of the case, Sir Charles gained his divorce. Lady Mordaunt was conveniently found to be insane and committed to an institution, away from public view.

Cyril Foley was another member of the expedition who knew King Edward VII both when he was sovereign and when he was the Prince of Wales. Foley was a very keen sportsman and shot regularly including with the German and British royal families. In his autobiography he recounted an incident in which both royal families were shooting at Sandringham. They had hoped to be hunting but there was a hard frost so they had to shoot hares instead. Some of the German party became overcome with enthusiasm and instead of staying in their places pursued the hares. During this period one of them accidentally shot King Edward VII. He received a pellet in the nose before lunch. Foley recounted how

‘and with his abundant good nature, which was one of his chief characteristics, merely shook his head and said, ‘Very dangerous, very dangerous,’

Foley added reassuringly that no one was killed that day!

Clarence Wilson who provided the largest amount of funding to the Parker expedition was a keen sailor and a member of the Royal Yacht Squadron. At the time the Commodore was King Edward VII. This period was considered the golden age of the R.Y.S. At the meeting in which Clarence Wilson was elected an active member of the R.Y.S., he was one of three new members. One of the two others was the Prince of Wales, the future King George V.