How the war changed everything

Funding for the expedition

When Valter Juvelius completed his cypher work he wrote on the final page:

‘it might be worthwhile to fit out an expedition to find the (Temple) archive. The Deutscher Palästina Verein in Berlin might be for this purpose be most adapted for (the) same.’

Reports say that as a result Johan Millen went to Germany to seek funding, but was unsuccessful. Whether he approached the Deutscher Palästina Verein for funding is unclear. Millen did not approach the Palestine Exploration Fund in London, so similarly in Germany he may have approached other individuals or groups. According to Cyril Foley the Germans were interested but could not persuade the Ottoman government to grant permission to dig. So Millen went to London and was eventually put in touch with Frederick Vaughan, George Seymour Fort and Montagu Parker.

The subsequent attitude of the expedition to Germany was one of hostility and suspicion. After the Haram al-Sharif Incident in 1911 Millen claimed that German newspapers wrote ‘polemics of a particularly reckless and indiscriminate nature’. He also singled out Gustaf Dalman, who he described as a German professor who had criticised the expedition. It is certainly true that Dalman was very critical of their work and about the damage that the expedition would cause in relations with locals. Juvelius similarly complained that immediately after the event, ‘a real storm of hatred was raised against us in Berlin’s German-Jewish newspapers.’

Juvelius and Millen wrote their accounts during the First World War and some of their anti-German rhetoric may have reflected opinions of the time. In his book On the Right Tracks Millen wrote how he believed the English and Swedes were descendants of the lost tribes of Israel. The Germans, by contrast, were the descendants of the blood-thirsty Assyrians.

Closeness in the Edwardian era

In contrast to this vehement Germanophobia many members of the expedition had close links to Germany and its royal family before the war. 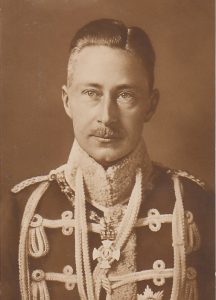 In 1910 the German Crown Prince and his wife came to England. They attended the London Horse Show and Lady Juliet spent time with the Crown Prince. Newspaper reports wrote about how she was almost as tall as him, dressed in white with a big, feathered hat and ostrich boa, and stood laughing with him. Four years later the Crown Prince was in command of the German 5th Army which attacked the British in the fields of northern France and Belgium. On the 16th October 1914, Lady Juliet’s husband Robin Duff was killed in action trying to stop the Germans outflanking the British Expeditionary Force and reaching the Channel.

Cyril Foley was similarly close to the German royal family. He was a very keen sportsman and shot regularly including with the German and British royal families. In his autobiography he recounted an incident in which both royal families were shooting at Sandringham. They had hoped to be hunting but there was a hard frost so they had to shoot hares instead. Some of the German party became overcome with enthusiasm and instead of staying in their places pursued the hares. During this period one of them accidentally shot King Edward VII. He received a pellet in the nose before lunch. Foley did say that he could personally vouch ‘for the safe shooting of the German Emperor and the Crown Prince, and, in addition, they both shoot quite well.’ He added ‘The German Emperor, considering that he had to shoot practically with one hand, was quite effective’. Such connections reflect how close European royalty and aristocracy were before the First World War.

When the expedition arrived in Jerusalem they had the German Crown Prince to thank for their headquarters. They stayed at the Fast Hotel and set up their headquarters in the Augusta Victoria Hospice. The Hospice or to use its German name Stiftung, was built following Kaiser Wilhelm II’s visit a decade before the expedition. During the imperial stay, Wilhelm’s wife, Kaiserin Augusta Victoria, said she wanted to leave a lasting legacy on the Mount of Olives. The resulting building looks like a Teutonic medieval fortress, more suited to the Rhine than Jerusalem. It had stunning views across the city and its tower is visible from as far away as Jordan. The Hospice’s architectural design would probably have been of less interest to the expedition members than its electric lighting and plumbing, including European-standard baths and lavatories. These were the first of their kind in Jerusalem.

The expedition members returned to the Hospice during the second expedition between 1910 and 1911 and they were staying in it when they bribed their way into the Dome of the Rock. The German deaconesses at the Stiftung had always spoken enthusiastically about their English gentlemen residents. However, they grew suspicious of where the Englishmen were disappearing to, night after night, dressed in local Arabic attire. The Superintendent heard rumours about what they were up to and challenged them that they were digging in the Haram. They falsely denied any such wrongdoing. The records of the Stiftung show that they checked out on the 18th April 1911.

As mentioned earlier the expedition first stayed at the Fast Hotel. This was also a German establishment. The Fast Hotel was located outside the city walls a few minutes walk from the Jaffa Gate. Alexander Howard built the hotel in the 1890s as a high-quality hotel for the increasing number of Europeans who were coming to Jerusalem. He commissioned Theodor Sandel of the German Templer Colony to design his new hotel. Sandel was a well-respected architect and designed many important buildings in the city. He designed a three-storey building, which could accommodate 125 first-class guests. It was built around a courtyard containing a tree-lined garden. According to an advert in a local newspaper, the hotel could provide ‘hot and cold baths ready at all times’. Unfortunately, Howard went out of business at the turn of the century and after a series of owners, in 1907, Alexander Fast & Sons bought the hotel. The Fast family were German Templers, like the architect. The Templers were break-away German Lutherans who wanted to promote the rebuilding of the Temple, to bring about the Second Coming of Jesus Christ.

For decades the Fast Hotel was one of the best in Jerusalem. It was the place to stay for the great and the good visiting Jerusalem. During the First World War, it hosted senior German officers helping the Ottomans fight the British. Every evening, during the campaign, groups of German officers would meet in the hotel to drink and talk. By 1917 the campaign was going badly and late one evening, a rather drunk, monocled, Prussian officer stood up. He proposed that the German Army should hand over the organization of its campaign to Thomas Cook & Sons.

The hotel continued to play a split role in the run-up to the Second World War. Waldemar Fast, one of the grandsons, ran a travel business out of the hotel in the 1930s. He was an enthusiastic Nazi, having joined the party in 1934. During the 1930s the hotel was a centre of anti-Jewish activity in Jerusalem. At the start of the Second World War Waldemar volunteered to join the SS and served as a spy in the SD. He managed German agents across the Middle East, including Palestine. He was interrogated by the British at the end of the war and listed his occupation as Hotel Proprietor. Following these interrogations, he was not charged with any war crimes. 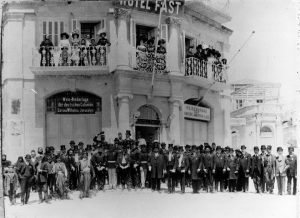