The connections of the Parker expedition to Kenya centre on Cyril Augustus Ward. He was a member of the expedition party in 1909.

He was also a gambler and a gambler and a poor one; by 1914 he was between £15,000 and £16,000 in debt. This amount is the equivalent of £1.7 million in 2021. It was an extraordinary achievement to have built up such a level of debt given his family situation. His father was extremely wealthy and Cyril Ward reputedly received £100,000 in the will. However, Ward found many occasions to lose money. In 1914, he lost £825 playing the card game chemin-de-fer. Fortunately his wife, formerly Baroness Irene, came from a wealthy background and reputedly had an income of £5,000 a year herself. She paid off his debts and took control of his income. Ward assigned all his future earnings to his wife and she gave him an allowance of £500 a year. 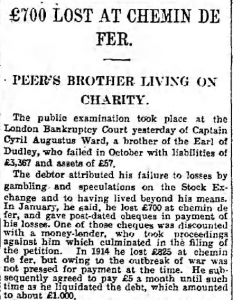 After the First World War he returned to his losing ways. Ward had to file for bankruptcy and appeared at the London Bankruptcy Court in November 1923. He had assets of £57 and debts of £3,367. Ward informed the court his debts were due to ‘losses by gambling and speculations on the Stock Exchange and to having lived beyond his means.’ Ward added that he was without funds as his wife had stopped his allowance and he was living on the charity of his brother-in-law. It was a humiliating downfall for the brother of a wealthy earl. Soon after he left for Africa and settled in Kenya. He lived the classic expatriate lifestyle there. Ward joined the Rift Valley Sports Club, was a well-known golfer at Njoro and was one of the first regular customers of the Kenya Brewery.

A document from the Rift Valley Sports Club records the following mundane interactions:

13 Apr 1928 – ‘On this day we the undersigned took the liberty of taking a table from the dining room to the verandah for our lunch. We found this to be most comfortable cool and quiet. We realise that this is not possible every day owing to climatic conditions but we do urge that when possible a certain number of tables should be provided on the verandah for lunch or any other meals which may be suitable. The accoustics in the dining room are so bad that it is a great relief to be able to have meals in quietude.’ [signed by Cyril A. Ward, V.F.C. Peto, R.S. Muttlebury & unknown]’

17 Mar 1928 – ‘This morning I tried to get on by telephone to the Club for half an hour with no result. I suggest that either the telephone be moved or an extension bell be fitted to where it can be heard.’ [supported by C.B.P. Fitzgerald & D.C. Venning]