There are a couple of connections. One of the expedition members was a regular visitor to and gambler at Mont Carlo and the expedition also used Monet Carlo as a departure place to sail for Jaffa.

Cyril Foley was not as well off as many of the other members of the expedition. One way he supported himself was gambling. Foley would go to Monte Carlo almost every year, both for the social scene and to gamble. He was the rarest of gamblers: a successful one. Each year Foley would bring £200 as capital and for several years multiplied this by ten. He made over £11,000 in the years before the First World War. This amount is worth around £1.3 million in 2021. Foley was a very disciplined gambler. He said he looked on the casino as a mechanical and sinister monster over which he had one advantage, that he could refuse to play with it at any time. Foley possessed the rare strength of will to stop when winning. Foley observed others who did not have the same discipline as he did. He wrote about Gordon Bennett, the Editor of the New York Herald. Bennett had the habit of getting drunk every year on the occasion of a big dinner party that Bennett gave at the Hotel de Paris. Foley says he and a friend watched over him like Good Samaritans. Bennett was playing roulette and won. He picked up his winnings and promptly threw it all in the air. Bennett intended to put the winnings on random numbers on the board. Some did fall on the board, but much fell in other gamblers’ laps or on the floor. 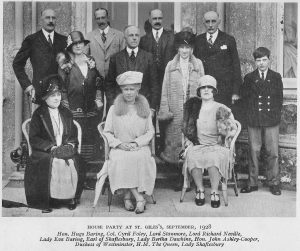 Cyril Foley at a house party with Queen Mary

Other times, when Bennett would pick up coins to play, he would drop coins on the floor. Foley said that there were women who quickly congregated like vultures around such individuals. They would have sticky substances on the bottom of their shoes. ‘One stamp, off to the lady’s cloakroom, louis (coin) removed, sticky substance renewed, and back again… The vultures gathered around him and reaped a tremendous harvest. At one time there was a sort of step-dance going on behind him, and the procession to the cloakroom became a queue.’

In late September 1911, the expedition left England to return to Jerusalem. They had left Palestine in the aftermath of the Haram al-Sharif incident and the upheaval that that sparked.

Parker, Clarence Wilson, von Bourg and Uotila all set off. The party included a new engineer called Griffin and four foremen to supervise work. The group travelled overland from London to Monte Carlo and then took Wilson’s new yacht bound for Jaffa. Since they had last travelled across the Mediterranean Wilson had sold the Water Lily and bought a larger, 338-ton steam yacht called the Dorothy. It was on this that the party headed back to Jaffa.