The famous and the no-so famous

There are many connections of the Parker expedition. The expedition was reported in US newspapers more than anywhere else and certainly the largest and most sensational reports were those which appeared in American newspapers. The coverage started as early as 1909 but was at its height after the Haram al-Sharif incident in April 1911.

Many of the American newspapers that covered the story the most heavily were part of the so-called yellow press. They would carry stories under large, lurid or sensational headlines and would often incorporate graphics and images. Often, they were less interested in the truth of the story than telling an exciting one. They would often include fake interviews or information within their reports. Another innovation which they pioneered were large Sunday supplements. The best-known proprietor of such papers was William Randolph Hearst. He was one of the most significant newspaper owners of the 20th century and the inspiration for the film Citizen Kane. The Parker expedition was precisely the sort of story that Hearst’s newspapers thrived on. His first newspaper was the San Francisco Examiner. On Sunday, 28th May 1911, the Examiner included a full page about the expedition. 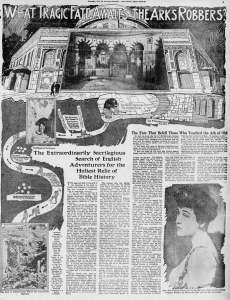 One of the issues with much of the coverage being in the yellow press is that much of what they reported was simple invention or exaggeration. One newspaper said that, when discovered, the robbers ‘loaded a vast amount of objects they had recovered on an armored train which was in waiting on the railroad outside Jerusalem’.

There was also a wonderfully inventive account of Ava Astor’s supposed conversation with Montagu Parker. The article suggested that if Parker found the Ark, she might agree to marry him. It quoted her as saying, ‘Well bring back the Ark and I will—talk to you again.” The yellow press were well known for inventing quotes as so this is most likely some fantastically inventive journalism. Having said that Ava Astor and Montagu Parker did know each other. She spent much time in England and he was a frequent visitor to America. Ava’s first husband was John Jacob Astor, commonly known as Jack. He was part of the immensely wealthy Astor family whose fortune was built on real estate in New York. Jack and Ava married in 1891 but after thirteen years together, their marriage was foundering. Ava spent a great deal of time in England with a country estate at Sutton Place in Surrey and a townhouse in Grosvenor Square. Jack and Ava separated and divorced in 1909. Her divorce settlement of $10 million from her husband would be worth $300m today. Ava Astor was not merely rich but was one of the most beautiful women of her age.

Many newspaper reports described Parker as a favourite of hers. The American newspapers were much less circumspect than the English ones of the time and, following her separation, regularly wrote about her suitors. One article in the Oakland Tribune said of Parker:

‘His attentions during the recent visit of Mrs Astor were indefatigable, while in his company the beautiful American seemed to lose that wearied look she continually wears, and occasionally smiled, something she rarely does.

Many newspaper reports claimed that the Armour Family of Chicago, who made their fortune in meat packing, and Consuelo Vanderbilt, the Duchess of Marlborough, were investors in the expedition. Once again these stories probably started with more than a grain of truth. Parker knew and socialised with Consuelo Vanderbilt. In 1908 shortly before the expedition Consuelo travelled back from England to New York on the Cunard liner Lucania. Newspaper reports describe how Parker accompanied her as a member of her party.

The trouble with all these stories is that there is no evidence in the records of the expedition to back them up. Neither the Armour family nor Consuelo Vanderbilt are recorded as investors in the expedition. One of the expedition members later wrote about an encounter with a rich American who wanted to invest:

‘Never shall I forget the face of a noted American financier when he came to the Ritz one morning with an open cheque book, and having intimated that he wished to be in the show, was politely told that his money was not required. He had to have two cocktails before he could believe it, and even then it broke him up completely.’

The records of the expedition do show that there were two American residents who were shareholders in the expedition. They were two Finnish nationals who had emigrated to Calumet Michigan. They in fact played key roles in getting the expedition off the ground. Their names were Arne Basilier and Uno Montin and they were related. Arne Basilier had emigrated to Calumet from Finland. On a trip home to Finland in 1907 he met a Finnish biblical scholar for lunch at the elegant restaurant of the Hotel Kämp in Helsinki. Dr Valter Juvelius told Arne about his research and how he had uncovered secret cyphers in the Old Testament which showed where the Ark was hidden. However, the scholar needed investors to be able to pursue the project. Arne said that his stepfather, who was a businessman, had connections and would be a good person to raise the money. That individual was Johan Millen and he went to England and there met Montagu Parker and the rest, as they say, is history. 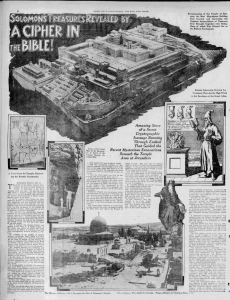