In November 1908 the syndicate sent a small party to Jerusalem to explore Juvelius’ cyphers. The three individuals in the party were Parker, Hoppenrath and Juvelius. After they left Jerusalem Parker went to Constantinople. He installed himself in the best hotel in the city, the Pera Palace Hotel. The hotel was built at the end of the 19th century for passengers arriving on the recently completed Orient Express. It was the first hotel in the city to have electricity, running water in all rooms and an electric lift. Years later, Agatha Christie wrote Murder on the Orient Express there. When he arrived, Parker sent a letter to Ziya Pasha, the Ottoman finance minister, saying that, following long research, he believed he had found a ‘very important treasure within the Ottoman Empire’. He wrote in French as this was the language of diplomacy at the time. Parker unashamedly used all devices to get the Ottoman authorities to take his approach seriously. He used his military rank and position and signed the letter as the Honourable Captain Parker of the Grenadier Guards. He also played up his British establishment connections. His father had been a government minister and his elder brother was a member of the House of Lords. 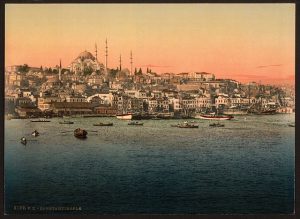 1908 was a challenging time to negotiate an agreement with the Ottoman authorities as it was a time of great upheaval in the Empire. A hereditary dynasty of sultans had run the Empire for centuries. The sultan was Abdul Hamid II, who had ruled since 1876. During his reign, the Ottoman Empire had contracted and had lost significant amounts of territory. The Ottoman government struggled with the level of national debt and there was great unrest about the resulting level of taxation. There was also a sense that the Ottoman Empire was slipping further behind Europe. The discontent prompted challenges to the centuries-old system of rule. The Young Turk revolution broke out, led by elements in the military. In the summer of 1908, they forced the sultan to give up absolute power and become a constitutional monarch. The sultan reinstated the 1876 constitution and Parliament. None of this upheaval stopped Parker. He was successful in his negotiations with the authorities in Constantinople. On the 26th November 1908 he signed two agreements with the Ottoman Imperial government. Ziya Pasha, the finance minister, signed on behalf of the Ottoman government and Parker signed the contracts as a resident of the Turf Club, Clarges Street, London.

The two contracts Parker signed were in Turkish and French, the latter still the international language of diplomacy. The first contract dealt with the purchase of the land for the excavations. The syndicate would pay the Ottoman government to purchase or expropriate the land required. They would have exclusive use of the land for the period of the excavations and then hand it back at the end. The second contract had twelve key clauses detailing the close collaboration between the expedition and the Ottoman authorities. All the costs of the excavations would be paid by the syndicate. The Ottoman authorities would provide ‘the military force necessary’ for Parker’s and his workers’ safety, the cost of which would be met by the syndicate. The Jerusalem governor was also required to ‘help facilitate through all means the task of the Hon. M. Parker’. The contract specified the Imperial Ottoman government and syndicate would split the fruits of the excavations.

The contract also provided that the Ottoman Imperial government could appoint two commissioners to oversee the work. the two commissioners appointed were Abdulaziz Mecdi Efendi and Habip Bey. They were both members of the Ottoman Parliament and were happy to accept the generous salary and easy life. 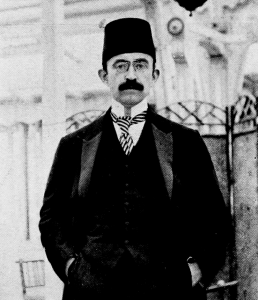 After the 1911 Haram al-Sharif incident the Ottoman Imperial government instituted a major inquiry into what had happened and this reported to the Ottoman Parliament. The ministers of war, interior and justice jointly agreed to set up just such an inquiry. They appointed a high-level group from around the Empire. It began its work on 30th April. Officials went to Jerusalem to interview all concerned and establish the facts of what had happened. A week later, on the 8th May, the Ottoman Parliament held an emergency debate on the Haram al-Sharif incident. Two notables, who were the representatives from Jerusalem, attacked both the Jerusalem governor and the Imperial Ottoman authorities. Ruhi al-Khalidi made a harsh, at times sarcastic speech. He said that the issue was a mysterious one which started like a tale from One Thousand and One Nights or Alexander Dumas’ Count of Monte Cristo.

At the same time as the inquiry was going on Parker was in Constantinople negotiating that the expedition could return to Jerusalem to resume their work. The Ottoman government agreed to this.