On the face of it there would seem to be little connection between a British-led expedition to Jerusalem seeking the Ark of the Covenant and a book written about imperial madness in the Belgian Congo.  However, there is a connection and that is the Swedish captain Axel Werner Hoppenrath. He worked in the Congo for decades as a steamboat captain and played a role in an event which spurred Conrad to write Heart of Darkness.

In Juvelius’ fictionalised account of the expedition he wrote about a character called Captain Nierot who was clearly based on Hoppenrath. He describes him as cynical, arrogant, rude, not trustworthy, unscrupulously selfish and boundlessly material, having strange notions of the rights of ‘higher’ races with ‘lower’ ones, and of owning slaves.

A Belgian missionary anthropologist and explorer called Constant Pierre-Joseph De Deken wrote how Hoppenrath had conducted a party of Catholic missionaries and nuns on the Stanley steamer in 1894. He said that even if you travelled slowly with Hoppenrath you could be sure of arriving.  De Deken recounted ‘an amusing tale’ (his words not mine) of how Hoppenrath had members of the crew whipped with the chicotte, including a boy, as they had not chopped wood for the ship’s boiler. 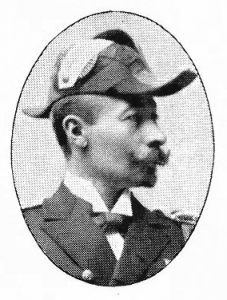 The Belgian Congo was the most venal and corrupt of all European empires which were established in the 19th century in the Scramble for Africa. It was a stealth vanity project of King Leopold and was his personal fiefdom. When he founded it, there was no oversight from the Belgian government. Leopold established it under spurious humanitarian pretexts. He claimed its goal was to end slavery and bring civilisation to the region. Instead, Leopold built the Free State on mass forced labour and outright enslavement of much of the African population. The regime became synonymous internationally with severed limbs.

Many of these mutilations were a systematic tactic in rubber harvesting. This violence was so great there was an international chorus of criticism towards the end of the 19th century. The Free State and King Leopold were denounced across the world. The most evocative account of the madness of the Congo is Joseph Conrad’s book Heart of Darkness.

Joseph Conrad spent six months in 1889 as a steamer captain in the Congo so saw conditions for himself. However, he only started to write Heart of Darkness several years later. Conrad was an avid reader of the Saturday Review and on the 17th December 1898 they reprinted an article from the diaries of an English explorer who, while an employee of the Free State, worked in the Belgian Congo. The articles first appeared in an article entitled ‘Cruelty in the Congo Free State’

In the diary, Glave describes travelling upriver on the river steamer the Stanley, captained by Axel Werner Hoppenrath. One diary entry recounts how the employees of the state ‘are compelled to bring in ivory and rubber and are permitted to employ any measures considered necessary to obtain this result.’ It goes on to detail the resentment this caused, which led to an attack by locals on a white outpost. In this attack, two white men were killed. So:

“Arabs were sent to punish the natives; many women and children were taken, and twenty-one heads were brought to the (Stanley) falls, and have been used by Captain Rom as a decoration round a flower-bed in front of his house!” 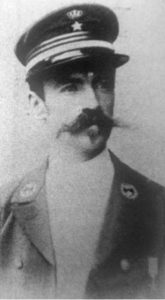 Joseph Conrad’s work uses this incident in one of the most powerful scenes in the book. The work focusses on a journey upriver by an English sailor called Charles Marlow. His long voyage by paddle steamer is to retrieve a European agent, called Kurtz, from a remote station. Kurtz has gone mad and as a result ‘ruined’ the business in the district. The first river steamer captain Marlow meets in the Congo is a Swede. The book portrays the horror of the regime on the trip.

The book’s most memorable description of the madness is when the steamer finally arrives at the outpost. As the outpost comes into view they see Kurtz’s house. The narrator is struck by the incongruous attempts at decoration surrounding the house. Outside the house are half a dozen posts, each topped with what he initially believes are round, carved balls. As they get closer, he looks through his binoculars again and suddenly realises what he is looking at. He is shocked to discover what the ‘balls’ really were:

The description of the garden ornamentation of heads, which Hoppenrath saw, is so similar to the description in Conrad’s Heart of Darkness that it is hard to imagine that this is coincidental.

The explanation of whether Kurtz is based on Captain Rom is detailed in Adam Hochschild’s incredible work King Leopold’s Ghost. He also discussed the idea that Kurtz is based on Rom in this video around 44 mins into the video.