In August 1909 a private yacht carrying the Parker expedition sailed into Jaffa, the port city for Jerusalem. Their goal was to find relics of one of the three great monotheistic religions that hold Jerusalem sacred. The group was neither the first nor the last European archaeologists to seek to discover precious religious relics in Jerusalem and the Holy Land.

The first archaeologist to go to Jerusalem was arguably Empress Helena. She was the mother of Emperor Constantine the Great. He was the Roman Emperor who converted to Christianity and changed a small persecuted cult into the dominant religion of the greatest empire of its time. It changed Europe and the world forever. That he did so is largely down to the influence of his mother, Helena. In 327 CE Helena travelled to Jerusalem. She was in her late seventies when she made the trip. According to one historian, she became ‘Jerusalem’s most monumental builder and miraculously successful archaeologist. She helped discover and excavate the places believed to be where Jesus was crucified and buried. She also helped build the Church of the Holy Sepulchre over these locations. She is further credited with finding a vast number of artefacts. These include the three crosses from Jesus’ crucifixion, the wooden plaque that read “Jesus of Nazareth, King of the Jews”, the nails that Jesus was fixed to the cross with, the garment he wore on the way to the cross, the crown of thorns that Jesus was forced to wear, the stairs that Jesus had to climb to his trial by Pontius Pilate and the remains of the Three Wise Men, who had visited Jesus in Bethlehem. If she did find all, or even a good number of these remains, she certainly was the most successful archaeologist of all time. 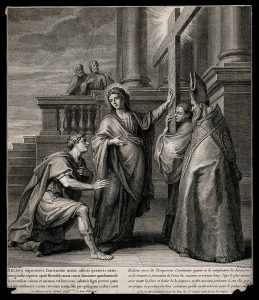 Helena was an improbable archaeologist and an improbable Empress. She was neither rich nor noble and worked as either a stable maid or barmaid. Her life changed forever when she met and married a young Roman soldier called Constantius when he was fighting near where she lived. In 270 CE he was on a campaign against Zenobia, a rebel queen of the Palmyrene Empire. Two years later Helena and Constantius had a son, Constantine.

Constantius rose through the ranks of the Roman hierarchy, principally under the sponsorship of Emperor Diocletian. Constantius divorced his lowly-born wife Helena and remarried Theodora, Emperor Maximianus’ daughter to aid his rise. The divorce did not significantly affect Helena or Constantious’ son Constantine. Following Diocletian’s abdication, Constantine rejoined his father, now Emperor Constantius and his campaign against the Picts in Britain. During this campaign, Constantius died in York and the legions acclaimed Constantine as Emperor.

When Constantine came to the throne, the Roman Empire was governed a tetrarchy of four individuals who ruled together. Sometimes this arrangement worked well, other times it did not. Constantine’s reign fell into the latter category. Over the next twenty years, he faced revolt and rebellion. He defeated his rivals one by one so that by 324 he became sole Emperor of the Roman Empire. It was during this period that Constantine adopted and favoured Christianity. His mother was a significant influence on this change. He first ended the persecution of Christians and then gave the religion his Imperial endorsement. In 321 Constantine issued a decree making Sunday a day of rest in the Empire. In 325 he convened the first Council of Nicaea. It established key Christian orthodoxies, such as the divinity of Jesus and the date of Easter.

As Constantine’s power grew, so his personal life mirrored his father’s. He had a son Crispus, by his first wife, Minervina. In 307 Constantine divorced Minervina for political reasons. Then, he married Fausta, the daughter of Emperor Maximianus. She was also the sister of Emperor Maxentius, who ruled alongside Constantine. Sadly, the dynastic links did not smooth things for Constantine; they caused him no end of problems. Constantine ended up ordering the killing of his father-in-law, brother-in-law, son and finally his wife, Fausta, in 326. He had her killed by locking her in a scalding bath or suffocating steam room.

Deadly family rivalries were hardly uncommon in the Roman Empire. So why are these ones important? The reason is that they changed the city of Jerusalem forever. At the start of Constantine’s rule, the city had not recovered from having been sacked and destroyed first by Titus and Vespasian and then during Hadrian’s brutal suppression of the Jewish Revolt of Simon bar Kochba. During these campaigns, the Romans tried to erase all traces of the city’s Jewish and Christian history. They looted and completely destroyed Herod’s Temple. In the triumphal procession through Rome that followed the victory, the legions paraded the spoils of the Temple, including the Temple Menorah, gold trumpets and ceremonial gold table. A triumphal arch still exists in Rome commemorating this event. Back in Jerusalem, Hadrian had built a Temple to Jupiter over the place where Jesus was crucified. He also renamed the city Aelia Capitolina, after his own family and a pagan god. He also renamed the province Judaea Palaestina. It was named after the Philistines, the Jews’ ancient enemies. So in 327 CE Aelia Capitolina was a small, pagan, Roman provincial city of around 10,000 people, in the minor province of Palaestina, with its Jewish and Christian history almost completely erased. One year after Constantine’s last family killing, he and Helena changed all this.

Perhaps Constantine wanted to atone for the killings of those so close to him. Maybe his and his mother’s religious faith drove him to act. Perhaps he wanted to create a monument to his imperial rule, as so many Roman Emperors did. Whichever it was, Constantine decided to find the precise location of Jesus’ crucifixion, burial and resurrection and build a fitting church at the site. Just a year after Fausta’s killing, the aged Empress Helena travelled to Jerusalem on this mission. According to Sozomen, an early Church historian, Helena also had another goal to find the cross on which Jesus was crucified and the tomb in which he was buried.

In the three centuries since the crucifixion, Aelia Capitolina had changed completely. So Helena had to search to find the site. Sozomen says that the location was probably pointed out by one of the remaining Christian Jews in the city. This person indicated that the crucifixion site was under a pagan temple to Jupiter. As a result, Constantine instructed that this temple be completely destroyed. In addition, the materials it was built with and even the earth it was built on were to be removed as far away as possible to remove the contamination of the site. While digging deep into the ground, the workers came upon a tomb. They identified this as the tomb of Jesus. Once they had found this, Constantine ordered Bishop Macarius to start work on what became the Church of the Holy Sepulchre and commanded:

“that not only the church itself as a whole may surpass all others whatsoever in beauty, but that the details of the building may be of such a kind that the fairest structures in any city of the empire may be excelled by this.”

However, according to Sozomen, Helena found not just the tomb but the cross on which Jesus was crucified, which became known as the True Cross. While they were digging, they found three crosses and another piece of wood with the inscription Jesus of Nazareth, King of the Jews. According to the Bible, Jesus was crucified with two thieves and revering one of their crosses was out of the question. Sozomen relates how Helena overcame the problem by using what we might call a Lazarus test. Bishop Macarius brought each of the three crosses to a noble lady dying of an incurable disease. The first two crosses had no effect, but she sprang from her bed, miraculously cured when she touched the third. A dead person was also brought back to life by the third cross.

Following this miraculous discovery of the first and arguably most important Christian religious relic, Constantine built the Church of the Holy Sepulchre on the spot. It was as he commanded a magnificent building, appropriate for the events it was commemorating. So with Constantine’s money and Helena’s work as an archaeologist, Jerusalem became a Christian city. Their imperial endorsement ensured that it drew Christians from near and far. All who came wanted to see the Church of the Holy Sepulchre and the True Cross. They also sought miracles and a fast track to heaven. They ascribed incredible healing powers to the True Cross. Between them, Constantine and Helena recreated the city based on Christian pilgrimage and fundamentally changed Jerusalem’s future.